I'm reviewing the Sundance darling Austenland today. This film has Mormon fingerprints all over it. Shannon Hale, who wrote the novel and co-wrote the screenplay, is a member of The Church of Jesus Christ of Latter-day Saints, as is co-writer and director Jerusha Hess (Napoleon Dynamite, Nacho Libre) and producer Stephanie Meyer. Also, lead actress Keri Russell was raised in the Church (she was in my stake growing up). Does the film cut the mustard for Austen fans? Will it be enjoyed by average movie-goers? Read on to find out!
AUSTENLAND REVIEW (GRADE: A) 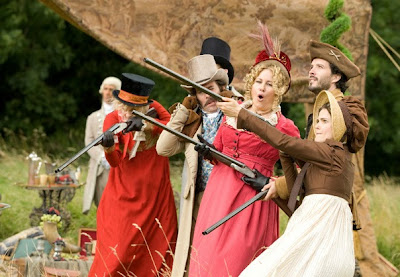 I'm going to go against the mainstream critics here, because while Austenland has only a 35% ranking at Rotten Tomatoes, I laughed all the way through, loved the characters, and was charmed by the love stories. I'll go so far as to say it's the best comedy of the year so far, and the best romantic comedy since 2006's Penelope. Keri Russell (August Rush, Mission Impossible III) stars as a lonely 30-something whose obsession with Jane Austen novels and films has seriously impeded her love life. She spends her life savings to travel to “Austenland,” a resort in England that aims to re-create the time period of the author's books, giving clients a fabricated role-play romantic experience with their own Mr. Darcy. 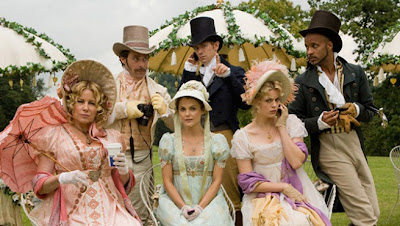 To say more would be to spoil the surprises of the story, but suffice to say that the screenplay pays clever homage to the tropes of Jane Austen novels as it lightly, but lovingly, pokes fun at them. Better still, one doesn't have to be a fan of the author to adore the film. Heck, even alpha males will find much to enjoy here. The film is well structured: nearly every scene either advances the story or contains a solid belly laugh. The cast (including Jane Seymour of Somewhere in Time, James Callis of Battlestar Galactica and One Night with the King, Brett McKenzie of The Hobbit, and scene-stealer Jennifer Coolidge of Legally Blonde) is excellent, and the humor ranges from delightfully silly to bitingly smart and clever. Best of all, unlike most comedies (which run out of steam towards the end), Austenland just gets better as it goes. This is a film for which the trailers don't do it justice. Perfect for a date night or girls' night out.
CONTENT OVERVIEW: Austenland is rated PG-13, but it's a mild PG-13 (as a reference, it's comparable to 13 Going on 30 or Just Like Heaven). There is no foul language or sex. There are a few mild-to-moderate innuendos, but nothing too over-the-top. A chiseled male actor keeps finding excuses to take his shirt off and at one point makes out with a woman against a wall, but both of these are played for laughs. There are a few instances of slapstick violence.
MESSAGES TO DISCUSS: “True love is not so much a matter of romance as it is a matter of anxious concern for the well-being of one's companion” (President Gordon B. Hinckley). All secrets come to light sooner or later (Luke 8:17).
If you enjoyed Austenland and want to support this site, try renting or buying my related recommendations through the Amazon ads below. Even if you just want to shop on Amazon, please enter the site through my homemade ads and shop for whatever you like! I'll get a percentage, which I use to see and review more movies 🙂
PRIDE AND PREJUDICE (1995) Easily the most-beloved adaptation of the classic Austen novel, this Emmy-winning TV miniseries captures the story in rich detail and is bolstered by fine performances, particularly by Jennifer Ehle as Elizabeth Bennet and Colin Firth as Mr. Darcy.
PRIDE AND PREJUDICE (PG, 2003) This modernized take on the classic novel transports the characters to latter-day Provo, Utah. This is actually quite funny and charming. Although it's made by Latter-day Saints, it sticks mostly to the story instead of cramming itself with lame in-jokes.
PRIDE AND PREJUDICE (PG, 2005) Lush cinematography, beautiful music, and a surprising performance by Kiera Knightley highlight this skillfully streamlined adaptation.
EMMA (PG, 1996) Gwyneth Paltrow stars in this charming little Austen adaptation, nominated for two Academy Awards.
SENSE AND SENSIBILITY (PG, 1995) This favorite features Emma Thompson, Kate Winslet, Hugh Grant, and Alan Rickman, who proves himself surprisingly adept as a romantic lead. Funny and whimsical.
BECOMING JANE (PG, 2007) Anne Hathaway and James McAvoy star in the true story of a fateful romance between Jane Austen and a notorious playboy which led to her becoming an author.
Later this week I'll have a fall movie preview up so you can plan your cinema-going for the next few months. Also, don't forget that my book 250 Great Movies for Latter-day Families is now available in paperback and Kindle. Pick up your copy today! 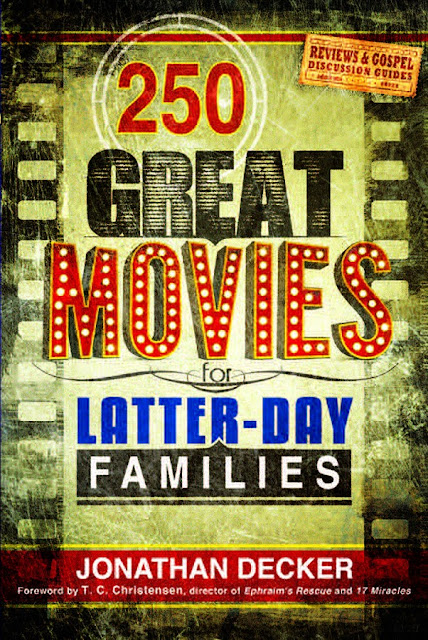