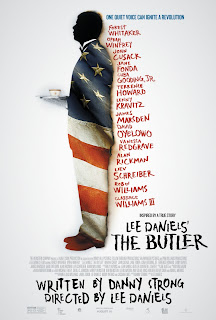 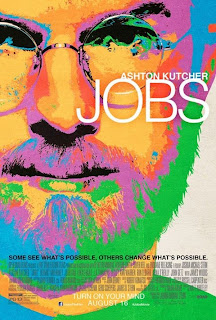 I've got a couple of historical dramas for you this week. The Butler features Forrest Whittaker, Oprah Winfrey, and an all-star ensemble cast  in the tale of a White House butler who served numerous presidents and whose family gets swept up in the Civil Rights movement. Jobs finds former Punk'd host Ashton Kutcher depicting the Apple Computers mastermind. Does the former do justice to the harrowing story of American race relations? Does the latter effectively portray one of the greatest innovators in modern history? Read on to find out!

THE BUTLER REVIEW (GRADE: B-) 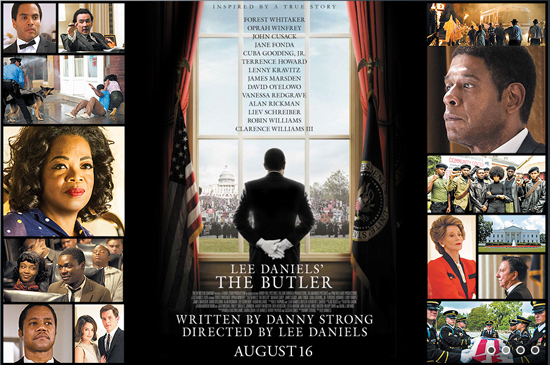 Undeniably powerful, with a superlative performance by Forrest Whittaker, The Butler's impact is diluted significantly by an endless parade of distracting celebrity cameos, preachy melodrama, and a polarizing finale that may alienate those who aren't fans of President Barack Obama. Whittaker stars as Cecil Gaines (very loosely based on an actual person named Eugene Allen) who, as a White House butler, gets a behind-the-scenes look at the politics of race relations while serving U.S. Presidents from Eisenhower to Reagan. 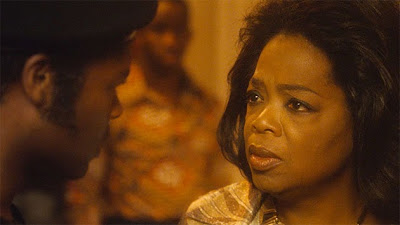 The supporting cast does fine work, especially the actors who portray Whittaker's family and coworkers. In the case of the former, Oprah Winfrey is excellent as Cecil's wife, as are David Oyelowo (Rise of the Planet of the Apes) and Elijah Kelly (Red Tails) as his sons (through whose eyes we experience the Freedom Rides, the work of Dr. King, the Black Panther movement, and Vietnam). I genuinely came to care for this family, hoping for their reconciliation when differences over how to fight for freedom come between them. As for the latter, Cuba Gooding Jr (Rat Race) and Lenny Kravitz (The Hunger Games) are given enough time to disappear into their characters, doing fine work. 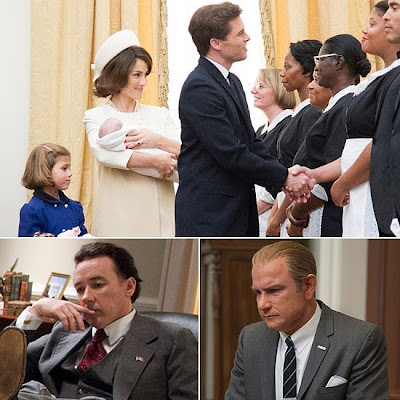 The same cannot be said for Mariah Carey, Robin Williams, John Cusack, and Liev Schreber, all of whom appear in glorified cameos. They never inhabit their roles; they just seem like celebrities in questionable makeup doing (except Carey) their best presidential impersonations. Lesser-known actors would not have brought audiences out of the story with their presence. James Marsden (Enchanted) and Minka Kelly (TV's Friday Night Lights) are actually pretty solid as John F. and Jacqueline Kennedy, while Alan Rickman (Harry Potter) makes for a surprisingly passable Ronald Reagan. 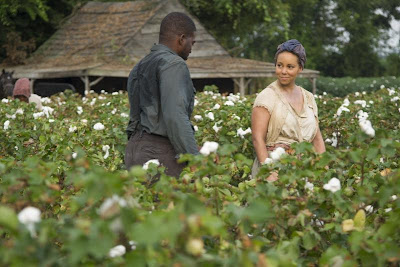 The script provides loads of genuine pathos as it marches through 80 years of American history, and
audiences cannot help but be moved by the courage and determination of peaceful demonstrators as they face the hatred and violence of mobs, police, and the Klan. The film stumbles in a few moments, leaning hard on the “emotion” button with swelling music and overwrought dialogue when a subtler approach would have felt more real.

The finale centers on the election of the first black president, Barack Obama, undoubtedly a huge milestone for America in general and the black community in particular. Given all that has come before it in the film, this inclusion is necessary. Supporters of the president will love how heavily he is showcased at the end of the film. Others may find that the film, in its closing frames, develops a polarizing agenda of implying that supporting racial equality and venerating the current president go hand-in-hand. 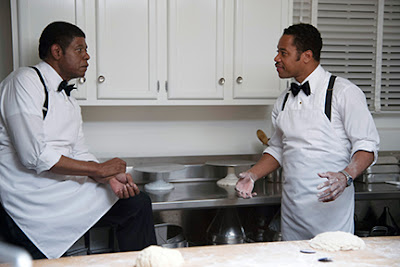 CONTENT OVERVIEW: The Butler is rated PG-13. There is one f-word, a fair amount of moderate profanity, and a couple of very sexual jokes. The “n-word” is used many times. It is implied that a woman cheats on her husband, though she regrets it and ends the affair. We see a painting of a topless woman. A woman is taken into a shed and raped; we don't see anything but we hear her scream. Twice we see a pair of African American bodies lynched and hanging from a tree; they are filmed in medium close-up and we see blood around their necks from the rope. A man is shot in the head (no blood); a bus full of “freedom riders” is attacked and lit on fire. Peaceful protesters are shot at, hit, taunted, attacked by dogs, and sprayed with a fire hose. 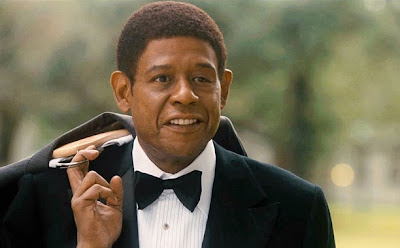 MESSAGES TO DISCUSS: By refusing to fight back, the civil rights pioneers followed the courageous example of the Savior Jesus Christ (Matthew 5:38-40, 43-44; Isaiah 50:6). Husbands and wives are to love and be faithful to each other (Doctrine and Covenants 42:22). “Black and white…male or female… all are alike unto God” (2 Nephi 26:33). Serving others is one of the noblest and most Christ-like things we can do (Matthew 23:11-12).  “No man who makes disparaging remarks concerning those of another race can consider himself a true disciple of Christ. Nor can he consider himself to be in harmony with the teachings of the Church of Christ. Let us all recognize that each of us is a son or daughter of our Father in Heaven, who loves all of his children” (President Gordon B. Hinckley, “The Need For Greater Kindness”). “Thus saith the Lord: ye shall not esteem one flesh above another, or one man shall not think himself above another” (Mosiah 23:7). “A commandment I give unto you, which is the word of God, that ye revile no more against them because of the darkness of their skins” (Jacob 3:9). “Racial prejudice is of the devil. Racial prejudice is of ignorance. There is no place for it in the Gospel of Jesus Christ” (The Teachings of Spencer W. Kimball, p. 237). 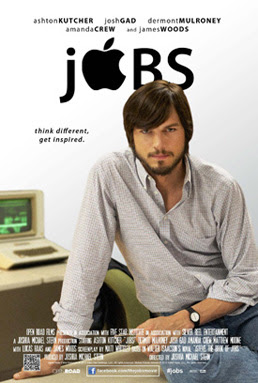 I've never been terribly impressed by Ashton Kutcher, but that's changing lately due to his inspiring speech about hard work, intelligence, and generosity at the MTV Movie Awards and his strong acting in Jobs, the much-hyped biopic about Apple computer found Steve Jobs. Though movie-goers may want to sink their teeth into Jobs' time as CEO of Pixar, his struggle with illness, or his family life, this film takes a far narrower focus, honing in on the creation of Applie computers, Jobs' ousting from his own company, and his triumphant eleventh hour return to save that company from ruin.

Kutcher shows dramatic range here that I never knew he had. His portrayal of Jobs is ultimately inspiring,
but this is definitely a “warts and all” rendering that finds the man, in his early years, cheating on his girlfriend, abandoning his baby daughter, and using/manipulating others to achieve his goals. Though comparisons to The Social Network are inevitable, with friendships sacrificed on the alter of technological innovation, I'm going to take the less popular opinion here and say that Jobs is the superior film, primarily because it more accurately portrays its primary subject, but also because it is a tale of redemption.

The supporting cast are excellent and the drama often connects, but the screenplay often suffers by keeping the motivations of its characters and details of the story too close to the chest, taking the wind out of moments that ought to crackle with intensity. What's more, important relationships are introduced then largely forgotten, while plot points with great potential (such as Jobs' reconciliation with his daughter) are disappointingly glossed over. Still, the inside story of one of modern history's great figures, and the technology that changed the world, is worth the watch even if it's incomplete. 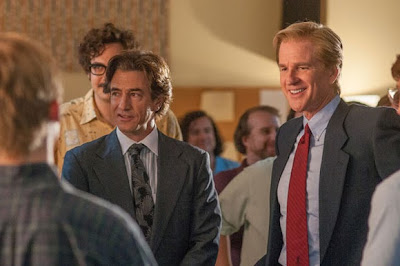 CONTENT OVERVIEW:  Jobs is rated PG-13. It has two f-words, some moderate profanity, and a few crude jokes. College-aged Steve Jobs is seen in bed with a woman, talking; he later gets high with his friends. There is some other drinking and drug use.