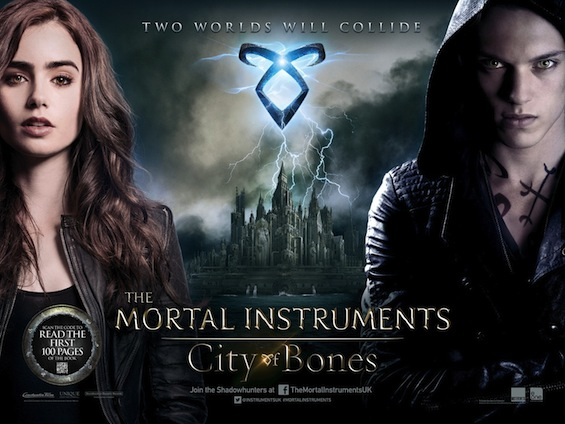 It'd be easy to dismiss The Mortal Instruments: City of Bones as a Twilight ripoff, but that's not fair: it's so much more than that. It's also a ripoff of Harry Potter, Star Wars, Buffy the Vampire Slayer, X-Men, Stargate, Hellboy, and Ghostbusters. Look, I love going to the cinema. I love it so much that at times I've been accused of being too lenient as a film critic because I usually find something to enjoy in any given movie. A film has to work really hard for me to flat-out dislike it, but The Mortal Instruments is such a laughably-acted, lazily-written, ridiculously-conceived vacuum of all that is good about cinema that I can't help but heap derision upon it. I know that revenge is wrong, but I feel the need to lash out at this movie and hurt it as badly as it hurt me. To do so, I will need to delve much further into spoilers than I normally do in my reviews, so be warned. 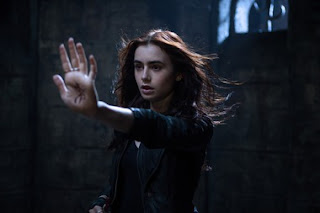 Lily Collins (Mirror Mirror) stars as Clary, which rhymes with Harry, which is fitting since she too discovers on her birthday that she possesses special powers and that her mundane little world is actually bursting with supernatural secrets. Speaking of mundane, like the Potter-verse there's a moniker given to non-magical, regular people, but instead of something as charmingly daft as “Muggles,” humans here are called “mundanes.” It's as if the film is telling us to prepare for boredom. 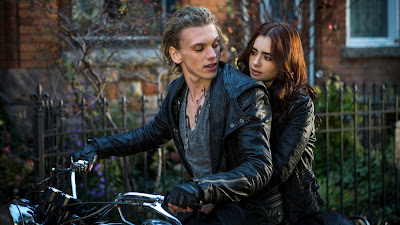 At any rate Clary, like Harry, is recruited for special training by a tall figure, but instead of lovable oaf Hagrid we get an emo/Gothic hunter of demons named Jace, played by Jamie Campbell Bower, who had a bit part as a character you don't remember in Harry Potter and the Deathly Hallows Part One and another bit part as a character you don't remember in the Twilight films. In real life Bower seems nice enough, but here his character comes across as a pale, emaciated, sweaty meth addict. Not my idea of a romantic lead, but whatever. He's the dangerous “bad boy” in this would-be love triangle: you can tell because he wears black leather rock star pants. He's the Edward to Collins' Bella. For the requisite Jacob stand-in (i.e. the guy stuck forever in the “friend zone”) the producers went in the opposite direction of beefcake. The character is rather scrawny, but don't worry: he's equally needy and pathetic. And yes ladies, he does take his shirt off. 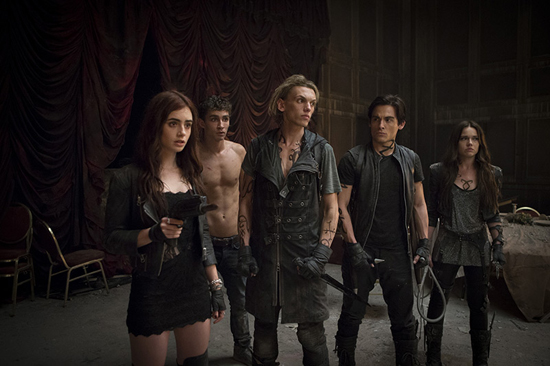 Clary is attacked by a demon dog in one of the film's only worthwhile scenes, a disgusting little number that is more than a little reminiscent of Ghostbusters (a fact acknowledged by the screenwriters with the sole amusing one-liner). Jace takes Clary to an invisible building, 12 Grimmuald Place, which is actually a superpower training facility called The Charles Xavier School for the Gifted “The Institute,” where she meets academic homebody Professor X  Hodge, played by Jared Harris, who was brilliantly imposing as Moriarty in Sherlock Holmes: Game of Shadows but here is utterly wasted. Hodge leads the X-Men  the Ghostbusters  “the Shadowhunters,” who teach Clary to seize her destiny as a vampire-slayer demon-killer. That is to say, they would teach her if they weren't too busy getting wrapped up in lifeless romantic angst, posing in gothic-emo clothing, and generally enjoying the life of one-dimensional characters. 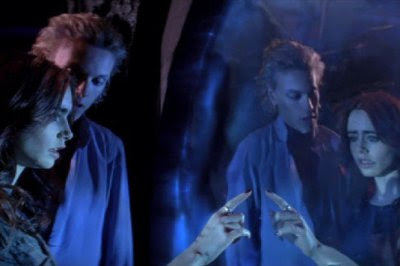 Along the way there's a flamboyantly homosexual oracle who inexplicably wears only a jacket and brief underwear (there's another gay character who better represents the LGBT community by electing to wear pants), an aquatic inter-dimensional doorway called the Stargate the Portal, and a creepy plot twist that would make Luke and Leia blush, effectively rendering the love triangle moot. Vampires, werewolves, and mind-reading subterranean ghouls make token appearances, but none of them do anything original or interesting. A gateway allowing demons into our world is opened, but those who must close it aren't nearly as cool as the Ghostbusters or even Hellboy. 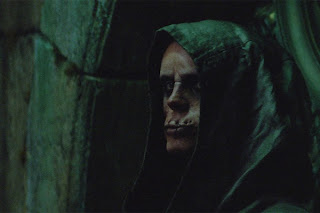 The dialogue and acting are frequently, albeit unintentionally, hilarious. Seemingly important plot points go entirely unexplained while characters often do the absolute dumbest thing they could possibly do at any given moment. For example:

– If you discovered that your friend had been bitten by an evil vampire, wouldn't you hurry and tell someone who might be able to help? Because Clary instead goes to swoon over Edward's Jace's ability to play the piano, gets distracted by a make-out opportunity, and forgets that her friend might be turning into a vampire… for the rest of the movie! She never gets around to dealing with that.

– If you were destined to miserably live out your days trapped in a giant cathedral because of either a curse or plain old agoraphobia, wouldn't you do the selfless thing and stay put instead of making a deal with a villain bent on world domination? I mean, I understand that you want to go outside and all, but if doing so meant the death or enslavement of billions, wouldn't you just take one for the team?

– If someone in your group has a special demon-killing sword, and you discover that you have the ability to momentarily “freeze” demons so that they can't move, wouldn't you slice-and-dice your way through them, killing them all so that they couldn't attack you the next minute when the paralysis wears off? Isn't that a better option than sneaking around them saying stuff like: “Let's go, hurry! The effects are going to wear off?” 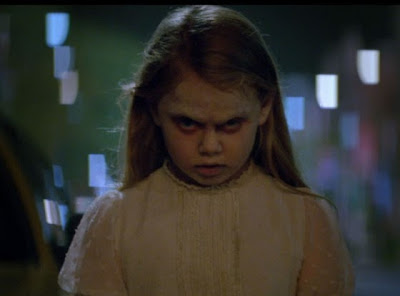 The book series upon which this film is based was well-received by critics and are enjoyed by people I respect. Having not read them, I'll give them the benefit of the doubt and chalk this disaster of an adaptation up to the filmmakers. There are a couple of impressive fight scenes and demon transformations, but they do little to polish this turd. I suppose I should wrap up this review and tie all of my thoughts cohesively together instead of just ending it without any closure, but the film did me no such favor, so… THE END. Tit for tat. I do feel much better, though. Thanks for letting me vent.

CONTENT OVERVIEW: The Mortal Instruments: City of Bones is rated PG-13. There are some frightening and grotesque demon transformations, including one where muscle tissue and blood are visible. Frightening ghouls communicate telepathically in a creepy scene. A young woman and her friend attend a nightclub where people are dressed in immodest gothic clothing. A man wears only a jacket and underwear. Two women dress in short, tight skirts and knee-high boots; one of them remarks that they “look like hookers.” A male character has a crush on another male character. A male character call another male character “hot.” A character hangs from chains at the top of an elevator shaft. There are numerous fights with creepy demons, vampires, and werewolves biting, punching, kicking, and stabbing each other. A young woman and a young man share a few passionate kisses. 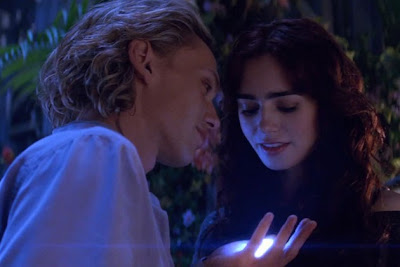 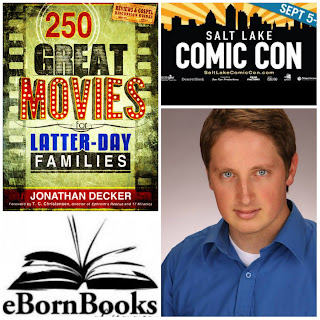 Hey peeps, if you want to come say hello, I'm doing book signings at the Salt Lake Comic-Con, September 5-7 (Thursday-Saturday) at the Cedar Fort and Deseret Book booths! I'll also be signing at Eborn Books in Salt Lake City on Friday, September 6 from 6-8 p.m. Get a signed copy of my book 250 Great Movies for Latter-day Families the week before its wide release and come chat with me for a bit. I'd love to meet you! Get more information and spread the word at:
https://www.facebook.com/events/516550878421406/?ref=2
https://www.facebook.com/events/595207710522171/?ref=2