Overlooked Gem: Why You Need to Watch SERENITY (2005)6 min read

When Marvel Studios needed someone to write and direct next summer’s highly-anticipated The Avengers (i.e. the film that unites Iron Man, Thor, The Hulk, and Captain America), they didn’t turn to a seasoned filmmaking veteran. Instead, they chose Joss Whedon, a man with only one feature-length film under his belt. However, those who’ve seen that one film, 2005’s Serenity, know that Whedon is exactly the man to juggle a large ensemble cast, deliver terrific action, and provide a character-driven story full of emotion, thrills, and humour.

Serenity revolves around a group of outlaws who rob from the corrupt and wealthy, but defend the poor and the innocent. Think Ocean’s Eleven meets The Magnificent Seven set 500 years in the future. Sunk by mediocre marketing, Serenity was praised by critics but didn’t find much of an audience beyond fans of the short-lived (and also mismarketed) TV series that preceded it, Firefly. Meant to serve both as a wrap-up of that series and as a standalone film that newcomers could enjoy, Serenity is funny, scary, butt-kicking, and surprisingly moving. It makes intelligent commentaries on the value of belief, the danger of large governments, and the relationship between free will and humanity, all weaved organically into the story. Even if you're not into sci-fi, give it a shot. Serenity is rated PG-13 for mild language, intense action violence, a pair of innuendos and a brief shot of a couple kissing passionately.

BY THE MOUTH OF TWO OR THREE [OR FOUR] WITNESSES

Time Magazine– “One of the underrated sci-fi masterpieces. What distinguishes Serenity is its focus on human relationships. It’s the realism of the drama that ensures when the climatic interstellar showdown finally goes down, the action has some serious emotional heft.”

Ebert and Roeper– “Two thumbs up. Serenity is made of energetic special effects, breathless imagination, some sly verbal wit and a little political satire. It has a great sense of humor about it, an attractive cast, and it's just a lot of fun. It has the rough edges and brawny energy of a good yarn. It also has unanticipated scenes of real impact.”

The New York Times– “It probably isn't fair to Joss Whedon’s Serenity to say that [it] is superior in almost every respect to George Lucas’ aggressively more ambitious Revenge of the Sith. But who cares about fair when there is fun to be had? Scene for scene, Serenity is more engaging and certainly better written and acted than any of Mr. Lucas's recent screen entertainments.” 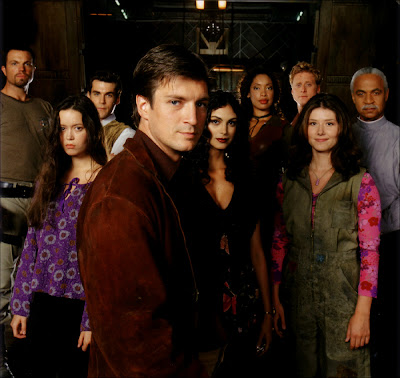 While Serenity is meant to be enjoyable as a standalone film, experience shows that viewers get more out of it with a little background on the characters' histories. I’ll avoid major plot spoilers for those who wish to go back and watch the TV series Firefly (or, better yet, stop reading and go watch that first). Characters not found below aren't from the show, and thus are introduced in the movie.

The Captain (Malcolm or Mal)

Captain Malcolm Reynolds fought on the losing side of a civil war between the freedom-loving Independents (nicknamed “Browncoats”) and the control-seeking Alliance. Nearly his entire batallion died in the Battle of Serenity Valley, a tragedy that led to his loss of both faith in God and a sense of purpose. He bought a ship (named Serenity after the fateful battle) and keeps his distance from the Alliance, paying the bills through smuggling, heists, passenger transport, and as a gun-for-hire. Though a criminal, he has more compassion and integrity than he'd care to admit.

The First Mate (Zoe) and Her Husband, The Pilot (Wash)

Zoe was Mal’s second-in-command during the war, and she’s as tough and brave as soldiers get. In contrast, her husband Wash is more sensitive, tender, and peace-loving. He’s also a crackerjack pilot. Though their marriage is unconventional, they’re happy and very much in love.

Jayne is a soldier-of-fortune with a big ego but only an average intellect. It has been said that, if he were aware that he was in a movie, he’d assume he was the star. Jayne is inherently selfish and doesn’t let people get close to him, as historically his loyalties are to himself and whomever will pay him the most.

Kaylee is a small-town tomboy through and through; she’s also got an enormous heart and is incredible with machines.

Shepherd Book is a Christian preacher who hitches a ride on Serenity. Initially met with skepticism and disdain, Book wins the hearts of the crew through his emphasis on compassion instead of judgment. He abstains from thieving but steps up when the crew protects the innocent, proving himself handy in a fight; it is implied that he had a mysterious and possibly violent past before he found Christ. Though he initially butts heads with the bitterly agnostic Captain (who tells the preacher he doesn’t have a say in things because he’s “not one of my crew”), the two come to respect one another. It's clear that the Captain lost faith in God because his belief was based on waiting for miracles, while Book’s faith comes from how his beliefs heal his troubled soul. Having found a planet to preach on, he doesn’t appear until well into the film.

Inara is a companion, a geisha-type escort who’s well-educated in art, culture, and philosophy. She and the Captain share a complex relationship; she doesn’t respect his profession (“thief”) and he doesn’t respect hers (“whore”), yet they’re attracted to one another in a way that runs deeper than just physical chemistry. He’s drawn to her intelligence and grace, while she’s intrigued by his sense of honor and his refusal to objectify her as other men do (he’s never even tried to kiss her). Both are too scared to confess their affection, so their romantic frustration takes the form of constant bickering. Afraid that her feelings for the Captain threaten her untethered sense of freedom, Inara leaves the ship and is no longer with the crew when the film Serenity begins.

River's character arch drives the story of Serenity, so the film does a great job of explaining her. Pay close attention to the opening ten minutes.

The film does a great job filling viewers in on Simon as well.

Essentially humans who've degenerated into wild animals, the Reavers are intelligent but ferocious and without conscience. These space pirates are known for eating their victims alive.