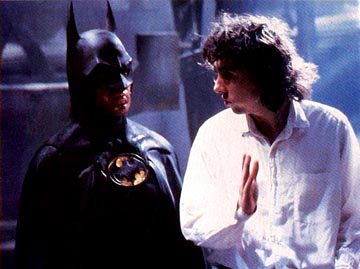 At his best, Tim Burton provides wildly creative Gothic entertainment. My kids have enjoyed his work, which I've shared with them when they're old enough.  here's a breakdown of my seven favorite movies by the famously eccentric filmmaker.

Before you roll your eyes, consider this: Pee-Wee's Big Adventure is Tim Burton's most critically-acclaimed film. Paul Reuben's man-child character reached his full comedic potential when combined with the madcap energy of Burton's direction and Danny Elfman's terrific score. This was a family-favorite in my household growing up. Loaded with quotable one-liners, kid-friendly fun, and silly scares, Pee-Wee's quest to find his stolen bicycle is grin-inducing from beginning to end, with plenty of chuckles and belly laughs. Yes, it's all very juvenile, but wonderfully so.

A hilariously macabre take on the afterlife, Beetlejuice stars Alec Baldwin and Geena Davis as recently deceased homeowners trying to frighten new tenants (including a charming Winona Ryder) out of their dream house. Failing miserably at haunting, they employ the services of an out-of-control poltergeist (Michael Keaton) who they then have to reign in. It's all in good fun, and the visual effects are endlessly astounding. There's a pair of crude jokes, some frightening images (to kids at least), and to my surprise, one out of place f-word (we had the edited-for-TV version growing up). When Beetlejuice kicks over a tree in a model graveyard, hit your mute button. Otherwise it's good times.

A fine example of “style-over-substance,” Burton's version of the Dark Knight may have nothing on Christopher Nolan's strong characterizations and storytelling (indeed, these are weaknesses in this version), but the film is rescued by iconic performances by Jack Nicholson as The Joker and Michael Keaton as Bruce Wayne/Batman, Danny Elfman's score (one of my all-time favorites), amazing production design portraying Gotham as a gothic wasteland, and dazzling action sequences.

What's more, if Burton hadn't rescued the Caped Crusader from the campy cheese of the 1960's version, there'd have been no opportunity for Nolan to deliver his vision. Rated PG-13, Batman has some language, violence, and implications that a couple spends the night together (they kiss while clothed and wake up later in long pajamas).

A romantic fairy tale, Burton's first collaboration with Johhny Depp was also his best. Again, the design of the sets and Danny Elfman's score threaten to steal the show, but Burton's story and the performances he gets from Depp and Winona Ryder prevent that from happening, as this fantasy carries real character and heart. The theme of “not fitting in” (and the loneliness that comes from being misunderstood) is one that the director has explored many times throughout his career, but never so poignantly as here.

Depp's character, a creation of a deceased inventor, is both cursed and blessed with scissors for hands, much to the curiosity and fear of his community. Only one person (Ryder) sees past the exterior to the man inside. Rated PG-13 for a scene of a local woman attempting to seduce Depp's character, sitting on his lap and trying to get him to cut off her top, but he resists and flees.

THE NIGHTMARE BEFORE CHRISTMAS (PG, 1993)

I'm cheating a bit here, as this holiday classic was actually directed by stop-motion maestro Henry Selick, who gave us Coraline and James and the Giant Peach, but with Burton producing and coming up with the story, The Nightmare Before Christmas has got our subject's creative fingerprints all over it. Jack Skelington, admired celebrity in Halloweentown, finds himself bored with scares and darkness.

Discovering the bright and wholesome joy of Christmas, he attempts to share it with his friends, whose ghoulish sensibilities make for an interesting blend of the two disparate holidays. Over the years, this has become a modern classic, and rightfully so: this is an animated masterpiece that perfectly sets the mood come October. The songs (again by Danny Elfman) are top-notch.

If there was ever a movie to interest you in family history, this is it. This terrific fantasy/drama is more colorful and uplifting than Burton's usual fare, yet equally creative in its artistry. A young man, estranged from his dying father, attempts to re-establish their bond by learning the truth of his father's life, which has always been presented to him as a series of tall tales.

While the portrayal of past events are fantastical, the events of the present are conveyed with poignant realism. This is a moving tale of lasting marital romance, parent-child relationships, and learning to love others, warts and all. Big Fish also wins bonus points for (SPOILER) a positive portrayal of marital fidelity. Rated PG-13 for brief moderate language and brief rear nudity, presented in an artistic/comedic context.

Though not as wildly popular as The Nightmare Before Christmas, this morbid love story is a lot of fun in its own right, as a timid Victorian-era groom (a pleasantly restrained Johnny Depp) finds himself torn between a living bride (Emily Watson) and a dead one (Helena Bonham Carter). Charmingly morose, with brilliant songs and impressive stop-motion animation, this is another Halloween favorite that's perfect for families.